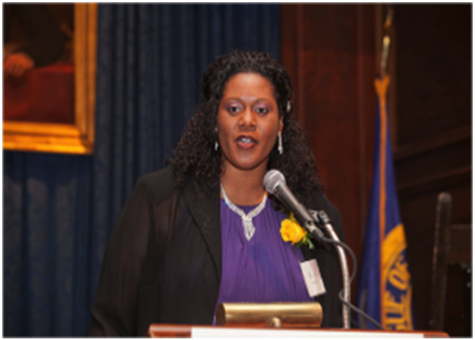 Tracy Johnson’s story is inspirational and she tells it with humility, grace, and vigor. “…one college counselor told me that I should give up. Discouraged, but not defeated, I worked years as a custodian, cleaning school buildings for the Philadelphia School District. I knew I had more to offer and that I could be more. Yet everything and almost everyone around me focused on my limitations and not my potential.

Raised in Philadelphia PA by a single mother, Tracy’s early experiences in public school were discouraging. Her struggles with reading led to an eventual placement in special education classes.

As a sixth grader, she had first-hand exposure to the low-expectations that often confront poor and minority pupils. Recalling her painful journey, Tracy notes that, “ For years, I could not understand why I had a difficult time learning basic math and English. I struggled even in the special education classes. Growing up, I was often labeled as slow by teachers and peers. I had many painful experiences in public school— including a high school special education teacher who told our entire class that none of us had the ability to ever go to college.”

My dyslexia was not diagnosed until I became an adult. Because of my strong Faith and the many mentors, supporters, family and friends who entered my life, I was eventually accepted into Harcum College. There I received an Associate’s Degree with a 4.0 GPA and then received a Bachelor of Science Degree from Cabrini College, graduating with high honors.”

Tracy Johnson has prevailed against numerous life challenges. Naysayers urged her to drop out of school and college because of her learning disability. Instead, Tracy turned challenges into victories, overcoming poverty and very limited support. Today Tracy is an accomplished lecturer and advocate for people with learning disabilities—particularly dyslexia.

She received her Masters Degree in Multicultural education from Eastern University and undergraduate degrees with honors from Harcum and Cabrini colleges in Pennsylvania. Tracy is the President and Founder of Vessels of Hope, a mentoring and networking organization for minorities with learning disabilities.

Ms. Johnson is a much in-demand speaker, whose personal journey to academic excellence and achievement, has inspired a large number of individuals with dyslexia and/or other learning disabilities, parents, educators, legislators, civic and business leaders. She is one of a number of individuals featured in the highly touted HBO documentary film, Journey into Dyslexia: Great Minds Think Differently, released in 2011.

“Johnson can now smile and shrug off the negative things that were said about her potential.”

“Tracy’s true life testimony of encouragement is a back to school blessing for students of all ages.”

“Johnson will prove childhood taunts wrong when she earns a degree with a 4.0 average and other honors tomorrow”

“Tracy you are a beautiful, radiant and accomplished woman. Continue to bloom everywhere you go as God’s Rose.”